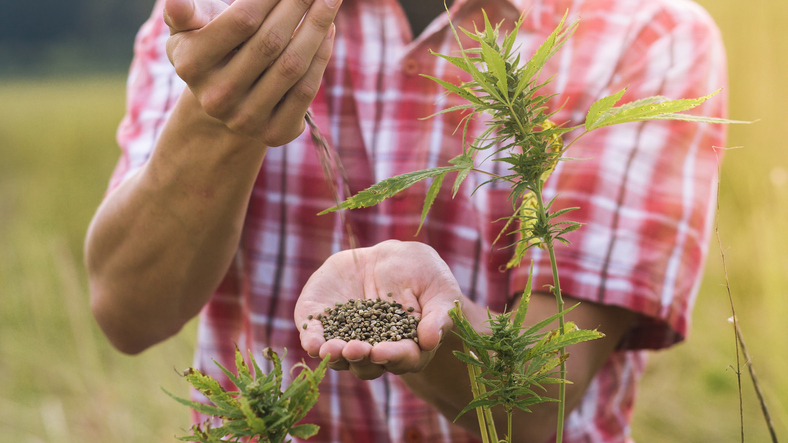 Researchers validate a simple and reliable new method for extracting and quantifying melatonin in different hemp varieties – finding the highest concentrations in the seeds.

Melatonin or the ‘sleep hormone’ is mainly produced during the night by the pineal gland. As well as helping to regulate our body clocks and sleep patterns, melatonin may also play other important roles in human physiology and health. Some people will be prescribed a synthetic version of melatonin as a treatment for short–term sleep problems – such as insomnia or for the symptoms of jetlag.

Although melatonin has been most extensively studied in animals, it is now known that many plants produce it as well. Since its first detection in 1995, melatonin has been detected in roots, leaves, fruits, flowers, and seeds of a variety of vegetables, cereals, fruits – as well as medicinal herbs. The hormone appears to have many diverse actions in plant physiology, including in growth, rooting, seed germination and photosynthesis.

But while more than 480 constituents have been identified in hemp (Cannabis sativa L.), out of which almost 150 are classified as cannabinoids, there is currently a lack of information about the presence of melatonin in this species.

In a new study, published in SN Applied Sciences, researchers set out to develop and validate a simple and reliable method to extract, purify and quantify melatonin in hemp.1 The researchers harvested, dried, and ground the leaves, flower heads and seeds of four different hemp varieties belonging to either legal (fibre type) – or illegal (drug type) chemotypes that contain tetrahydrocannabinol (THC), which is the main psychoactive compound in cannabis.

The team set up a sample preparation procedure which involved methanol extraction and a solid phase clean up protocol to extract the melatonin, followed by quantification using liquid chromatography-electrospray ionization tandem mass spectrometry (LC–ESI/MS/MS). After validating their new protocol in line with international guidelines, they showed that melatonin accumulates highly in hemp seeds, in the range of 13.43 to 30.40 ng/g while the concentration in other samples was much lower.

As well as solvents and reagents of analytical or the highest grade available, the researchers used ultrapure water generated from an ELGA PURELAB® laboratory water purification system, minimising the risk of adding contaminants that may affect their results.

This study demonstrates the application of a validated new method for quantifying melatonin in hemp varieties belonging to both fibre type and drug type chemotypes. The results demonstrate that hemp seeds contain higher concentrations of melatonin than the aerial parts of the plant, aligning with its essential functions in protecting germ and reproductive tissues.

The highest levels of melatonin were detected in the seeds of a fibre type variety of hemp, suggesting that they have potential as a valuable food source with positive benefits for modulating sleep patterns.

ELGA LabWater has been a trusted name in pure and ultrapure water since 1937. We believe in giving you choice in how you use our water purification solutions, supported by excellent service and support.

After completing an undergraduate degree in Biochemistry & Genetics at Sheffield University, Alison was awarded a PhD in Human Molecular Genetics at the University of Newcastle. She carried out five years as a Senior Postdoctoral Research Fellow at UCL, investigating the genes involved in childhood obesity syndrome. Moving into science communications, she spent ten years at Cancer Research UK engaging the public about the charity’s work. She now specialises in writing about research across the life sciences, medicine and health.