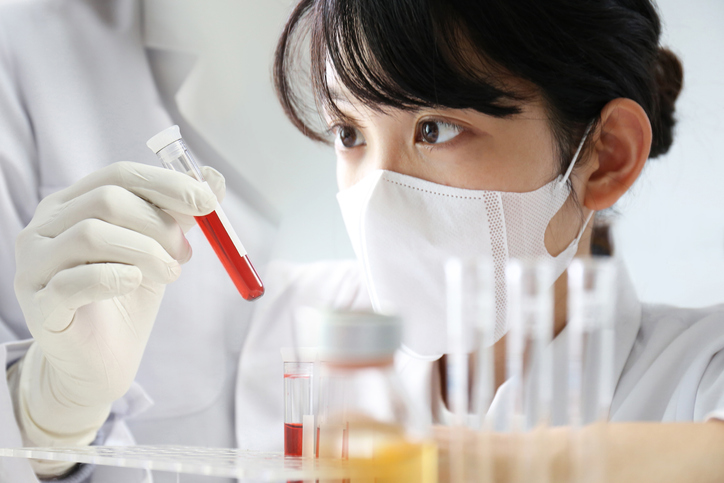 The synthetic polymer poly(2-methoxyethyl acrylate) (PMEA) is of considerable interest to the medical device sector, due to its excellent blood compatibility and unusual interaction with water.

Researchers at Kyushu University and Yamagata University in Japan have been exploring the interfaces between PMEA analogues and water or phosphate-buffered saline, using atomic force microscopy to learn more about the adsorption of proteins, which contributes to adverse reactions to medical devices.

The medical world makes good use of artificial blood vessels, catheters and stents. These are manufactured from materials that have been carefully chosen to minimise the likelihood of the patient developing a blood clot as a result of the insertion. The challenge for manufacturers of medical devices is that blood coming into contact with a foreign material – such as an implanted medical device – activates the body’s biological defence systems, including the complement cascade, blood coagulation and inflammatory responses. As a result, medical devices require a high degree of antithrombogenicity to minimise the possibility of a blood clot forming on the material surface.

Biological reactions to medical devices are triggered by the adsorption of proteins on the material surface, leading researchers to study the amount, composition, distribution, conformation and orientation of adsorbed proteins, as well as interfacial parameters such as the wettability, surface potential, topography, molecular mobility and hydration of the material surface. PMEA, a synthetic polymer with excellent blood compatibility, is of particular interest to the medical sector due to its unusual interaction with water. Water interacting with PMEA is classified into three separate states: free, freezing-bound (intermediate) and non-freezing. Adsorption and conformational alteration to proteins on PMEA-type polymers are inhibited when the proportion of intermediate water increases compared to free and non-freezing water. This intermediate state water has also been identified during interactions with a number of other blood-compatible synthetic polymers – including polyethylene glycol (PEG) and poly(2-methacryloyloxyethyl phosphorylcholine) (PMPC) – as well as biopolymers such as proteins and polysaccharides.

Researchers at the Graduate School of Engineering and the Institute for Materials Chemistry and Engineering at Kyushu University, Fukuoka, and the Frontier Center for Organic System Innovations, Yamagata University, Yamagata, have explored the interfaces between PMEA analogues and water or phosphate-buffered saline (PBS) using atomic force microscopy (AFM). Alongside this, they also studied the relationship between the interfacial structures and adsorption of fibrinogen, which is one of the main components in plasma and plays an important role as a scaffold in the formation of blood clots.1

Polymer solutions (0.2 % w/v polymer/solvent) were prepared by dissolving PMEA in methanol and poly(butylacrylate) (PBA) in ethanol. Polyethylene terephthalate (PET) substrates were rinsed in ethanol and dried at room temperature for one hour, before spin-coating the PET twice with the polymer. The sessile water droplet was comprised of purified water from an ELGA Labwater PURELAB® system. Polymer/PBS interfaces at 37 °C were observed using AFM. Adsorbed fibrinogen was determined using a micro-BCA assay, and the degree of conformational change on the polymer interface was assessed using ELISA, monitoring absorbance at 570 and 405 nm respectively. The interaction between the adsorbed fibrinogen and the polymer interfaces was measured using AFM.

Why Choose ELGA LabWater in Japan?

The presence of impurities in laboratory water can be a major problem in research experiments, and can seriously compromise results. ELGA LabWater has been a trusted name in pure and ultrapure water since 1937. We believe in providing you with water purification solutions that can meet a wide range of needs and applications, backed by excellent service and support. For more information on our Type I ultrapure water systems, check out our PURELAB Quest, PURELAB Chorus 1 Complete and our PURELAB flex models.

When lives are at stake, there is no margin for error. Your clinical analyser must receive a constant and reliable supply of CLRW.

Find out how to protect your test results